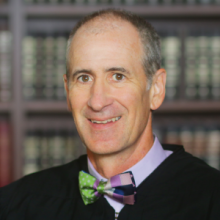 Judge Louis A. Trosch, Jr., is a Superior Court Judge in the 26th Judicial District in Mecklenburg County, North Carolina.  He served as District Court Judge, mainly in the Juvenile and Family Courts, from 1999 until his election to the Superior Court Bench in 2018.  Judge Trosch has served as an Adjunct Professor in the Belk College of Business since 1995, teaching both Business Law I and II during the intervening years.  He brings both an intimate knowledge of the law and extensive court room experience to his classroom.