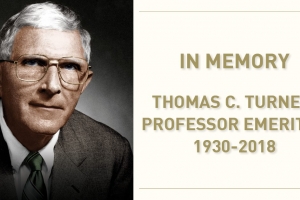 Emeritus faculty member Thomas C. Turner, who helped establish the accounting department at UNC Charlotte and remained dedicated to the University throughout his life, died Wednesday, Feb. 21, at the age of 88.

When he arrived at the University in fall 1966, Turner assembled a team of professors who shared his commitment to teaching excellence and service to students. During his 25-year tenure at the University, Turner helped oversee the maturation of the accounting department into the School of Accountancy that now bears his name. He retired in 1991, but remained a strong supporter of the University.

Accounting alumni helped establish the Tom Turner Teaching Award in the early 1990s after Turner retired. In 2014, more than 150 alumni and friends contributed almost $240,000 to create an endowed scholarship to support undergraduate accounting students, provide increased funds for the Thomas C. Turner Excellence in Teaching Award, and support the major renovation of the Department of Accounting conference room named in Turner's honor.

His gift reflected his passions for teaching and mentoring students during his years of leadership, said Steven Ott, dean of the Belk College of Business at UNC Charlotte.

“Tom Turner was instrumental in founding a culture in the department. He hired dedicated professors that were especially good at teaching. But he also connected the Accounting Department with industry, creating deep connections with accounting firms. The dedication to teaching and the connections with accounting firms are still strong today because of his influence years ago,” Ott said. “The Belk College honors Tom’s dedication and his memory.”

“Tom Turner emphasized the individual needs of students, many of whom were returning to school after service in the military, others who worked factory jobs at night to come to school in the morning, and single mothers needing to earn a better living. He will be remembered for his service and dedication to our students,” Dubois said.

“Tom set the vision, he led the team through the nascent years of the department, and he taught students who would go on to lead top accounting firms and top companies,” Burton said. “He was a leader who inspired and motivated thousands of students who are now successful alumni. Our school will continue to build upon his legacy.”

Prior to his faculty career, Turner volunteered for service in the Korean War and earned a Purple Heart for bravery on the battlefield.

Outside of the classroom, Turner served for many years as the chancellor-appointed Faculty Athletic Representative to the NCAA and was a guiding force in the university joining the Sun Belt Conference in 1976. A year later, the 49ers men’s basketball team made the NCAA Final Four.

During the past 50 years, the Turner School of Accountancy has earned many accolades. Alumni of the school are partners in all of the major accounting firms in the region, leading law firms and in many other CPA firms. The school receives broad philanthropic support from all of the major accounting firms and Fortune 500 companies. Accounting firms and large companies in this region recruit interns and graduates from the school. Faculty members have won numerous university, state, and national awards, and they work closely with local firms to provide extensive professional development. Faculty members are recognized as national experts in taxation and accounting regulations.