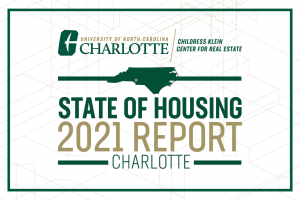 As the pandemic rages on, so does the acceleration of increasing housing prices in the Charlotte region.

Home buyers throughout the eight-county Charlotte region are facing towering prices and a lack of affordable housing, according to the “2021 State of Housing in Charlotte Report,” which was released by UNC Charlotte’s Childress Klein Center for Real Estate (CKCRE) on Wednesday, Nov. 17.

According to the report, median home prices in the Charlotte market increased at an annual rate of 16.3% from September 2020 to September 2021. The report also found a dramatic increase in rental prices. In 2021, the average effective rent in the region increased by $198 or 16.6% per unit.

The region was already attracting newcomers prior to the pandemic. However, the pandemic has further accelerated the growth, said Yongqiang Chu, CKCRE director and the primary author of the housing report.

“A persisten and strong demand for housing combined with the struggles from the supply side during the pandemic caused an unprecedented increase in house prices,” Chu said. “The region is also experiencing a rapid shift in the distribution of house prices. Should the trend continue, the Charlotte region may soon face significant challenges regarding housing affordability.”

Key takeaways from the report:

CKCRE’s 2021 research report also includes an in-depth review of housing in the Charlotte region over the last 20 years.

The main findings from the long-term analysis are:

The report, which pulls from seven primary data sources, focuses on Mecklenburg County and the seven counties that surround it: Cabarrus, Gaston, Iredell, Lincoln, and Union counties, as well as Lancaster and York counties in South Carolina.

The report was released at the virtual 2021 State of Housing in Charlotte Summit. The summit, which opened with a welcome from UNC Charlotte Chancellor Sharon L. Gaber, also included an industry panel discussion that focused on affordable housing.

Since it was first released in 2019, the annual report has become a go-to resource for reporters and governmental officials looking for accurate data on the state of housing in the region. The report is part of a multi-year project, led by Belk College of Business faculty, that aims to serve as a critical piece of research and starting point for discussion regarding housing policy in the Charlotte region.

The report can be viewed at realestate.charlotte.edu/CLTHousing.

CKCRE’s State of Housing in Charlotte is supported by these industry partners:

About the Childress Klein Center for Real Estate
The Childress Klein Center for Real Estate at UNC Charlotte was established in 2005 to further the knowledge of real estate, public policy and urban economics in the professional community through teaching, research and community outreach activities. The center administers the M.S. in Real Estate program, the MBA concentration and certificate programs in real estate finance and development. For more information, visit realestate.charlotte.edu. The center is part of the Belk College of Business.