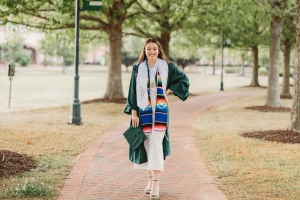 Betsabe Rojas Gonzalez has spent her time at UNC Charlotte working to be an advocate for others. It's a value that stood out to her when choosing UNC Charlotte.

“I chose UNC Charlotte because of the opportunities and support they provided students,” said Rojas Gonzalez, who will continue her education at Princeton University as a recipient of the highly competitive Thomas R. Pickering Foreign Affairs Program graduate fellowship. “UNC Charlotte has multicultural programs that help first-generation and Latinx students transition into college life.”

Rojas Gonzalez will graduate with a bachelor of science in economics, as well as a political science degree and a minor in statistics. The Business Honors student plans to pursue a master’s in public affairs at Princeton.

She served as president of the Latinx Student Union and worked several internships, including an internship in the U.S. Department of State’s Bureau of Population, Refugee and Migration.

Some of her favorite memories on campus are those spent playing intramural soccer with her friends.

“There is something special about rushing to get to the field after class to play underneath the lights and going out for food afterwards,” she said.

Rojas Gonzalez thanks Dr. Ted Amato, professor of economics in the Belk College, for his impact on her.

She encourages future Business Niners to maximize their time at UNC Charlotte.

“You’ve always wanted to play the ukulele? Join the ukulele club!” she said. “The next four years pass by in the blink of an eye, so make sure you make the most of it. Throw yourself into everything because this is the time you discover who you are.”

This article is part of a series of spotlights featuring our class of 2022 graduates.