Belk College class of 2022 ready to shape what’s next 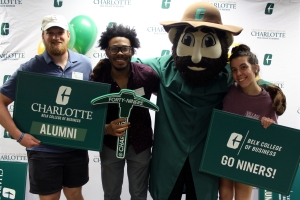 Thursday, May 12, 2022
Nearly 1,000 graduates joined the Business Niner alumni network.
The Belk College of Business is celebrating 933 class of 2022 students who received their degrees at in-person Spring Commencement ceremonies at Jerry Richardson Football Stadium on Friday, May 13.
Both ceremonies were live streamed and recorded.
Despite several years of challenges related to the pandemic, class of 2022 graduates have proven themselves to be adaptable to achieve their goals.
“The class of 2022 journey is a testament to the resilience and tenacity of our graduates. These qualities will remain with them as they continue to work toward their personal and professional goals,” says Jennifer Troyer, Belk College dean.
The Belk College has celebrated the spring class of 2022 and welcomed them to a network of over 35,000 alumni through video messages, e-communications and social media posts in addition to the Belk College spring graduates celebration that was hosted on April 26.
Belk College spring class of 2022 by the numbers:

A record of nearly 5,300 degrees and certificates were awarded this semester at UNC Charlotte. That includes nearly 3,700 bachelor's degrees, an increase of 26% from just five years ago.

Belk College class of 2022 graduates are set to shape what’s next, whether they’re joining a corporation, starting their own business or continuing their education. Here is a glimpse of Belk College's class of 2022.

Liz McClure, a non-traditional undergraduate student who earned a management degree, was selected to speak during Friday morning’s commencement ceremony.
Marice Raynor graduated with a bachelor of science in economics. After recovering from a serious car crash, Raynor transferred to UNC Charlotte to finish his degree. He will begin working for Bank of America as a wholesale credit analyst after commencement.
Betsabe Rojas Gonzalez, a double major in economics and political science, will attend Princeton University to earn a master’s in public affairs. The first-generation college student is one of the first UNC Charlotte recipients of the highly-competitive Thomas R. Pickering Foreign Affairs Program graduate fellowship and will be awarded $84,000 for two years of graduate studies, internships and other professional development opportunities.
Sydney Pike, a marketing student who worked for Charlotte baseball for four years, has accepted a position with  the Charlotte Knights after earning his bachelor’s in business administration majoring in marketing.

Marketing major Zach Owens always dreamed of graduating with a college degree. His mother left him a heartfelt message, which was featured by UNC Charlotte. The two share a special bond, each serving as the other's biggest supporter, often leaving one another messages of love and support.


MiKayla Raines, 23, is the youngest UNC Charlotte graduate to receive a Doctorate in Business Administration (DBA). Raines earned her bachelor’s degree at 18 and MBA at 19.
Joe Mulla, a U.S. Marine Corps veteran received his DBA, leveraged his degree and research data to transition into a senior-level position at Truist Financial.
Tyler Bacote graduated with an M.S. in Management. The U.S. Army veteran will work for Deloitte as a health and human services analyst following commencement, while pursuing a Master of Social Work at UNC Charlotte.
Nic Gee graduated with a M.S. in Management. Gee, who holds a bachelor of science in electrical engineering from UNC Charlotte, recently accepted a position as a technical sales engineer at Keyence Corp.
Meaghan Wallace graduated with an M.S. in Management at just 18 years old. She is the youngest graduate to receive her degree this semester.
Highlights
Joe Price ‘83 was one of two UNC Charlotte alumni to receive an honorary Doctorate in Public Service. Price, who earned a bachelor’s degree in accounting, is a partner with Falfurrias Capital Partners. Price, a former University trustee and emeritus member of the Belk College Board of Advisors, held several senior roles at Bank of America, including president of consumer and small business banking and chief financial officer.  Price’s honorary degree was awarded at the Friday morning ceremony.
Senior Class President Charles “Vince” Graham, a finance major with a concentration in accounting and minors in management information systems and Spanish, led graduates in the traditional Turning of the Tassel during Friday morning’s ceremony. Turning the tassel on a graduation cap signifies the transition from student to graduate.
Melinda Eudy made her mark as the eldest baccalaureate graduate for spring 2022, earning a Bachelor of Science in Accounting at age 62.
UNC Charlotte Trustees and Belk College alumni Dennis Bunker ‘81 and David Mildenburg ‘92 MBA provided a special greeting on behalf of the UNC Charlotte Board of Trustees during the commencement ceremonies. Bunker is the founder and a partner at Bunker Land Group, and Mildenburg is the editor of Business North Carolina magazine.
LaShana Wiggs, a DBA graduate, addressed graduates during Friday evening’s commencement ceremony. Wiggs, vice president and financial crimes manager in the Wholesale Banking Commercial Real Estate Risk Management division at Wells Fargo in Charlotte, overcame many obstacles in pursuing her DBA. She was diagnosed with multiple sclerosis in the middle of pursuing her degree and slowly lost her ability to walk.
Grace Nixon, who graduated with a marketing degree, was named UNC Charlotte’s 2022 Student Employee of the Year. Nixon has worked for University Recreation since August 2019, and is described as an advocate for students.
About the Belk College of Business
Established in 1970, UNC Charlotte’s Belk College of Business is one of the Carolinas’ largest business schools, with more than 5,100 students, more than 100 full-time faculty, and an alumni network of more than 34,000. Accredited by AACSB International, the college is committed to building strong partnerships in the greater Charlotte region and beyond as North Carolina's urban research business school. Learn more about how the Belk College is driving what’s next at belkcollege.charlotte.edu, and on LinkedIn, Facebook, Twitter and Instagram.