Belk College Alumni Appointed to University’s Board of Trustees 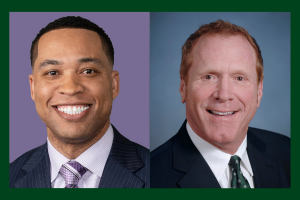 Two Belk College of Business alumni are among those appointed or reappointed to UNC Charlotte’s Board of Trustees. The appointments are effective July 1.

Among the three new Board members appointed by the University of North Carolina Board of Governors to serve is Belk College alumnus  Dontá Wilson ’98, chief digital and client experience officer for Truist Financial. Wilson will serve a four-year term.

In addition, three current trustees were reappointed to serve a second term. Belk College alumnus Dennis Bunker ‘81 was first appointed to the Board of Trustees in 2017 and was elected as secretary in June 2019.

About Dontá Wilson ’98
Dontá Wilson is chief digital and client experience officer and a member of the executive leadership team for Truist Financial Corporation.

Wilson has served in various leadership roles during his more than 20-year career at Truist and BB&T. He was named chief digital and client experience officer at BB&T in 2018 and remained in that role after the merger of equals between BB&T Corporation and SunTrust Banks, Inc. that created Truist Financial Corporation in December 2019. He was appointed to the BB&T executive management team and named chief client experience officer in 2016.

Wilson serves on the board of directors of Signet Jewelers (NYSE:SIG). Passionate about being active in his community, Wilson also has served on many nonprofit, education, and community service boards. He is founder and board member of I Am My Brother’s Keeper inner city mentor program, serves on the Belk College Board of Advisors and is on the board of Samaritan’s Feet. Wilson is a member of World 50/Executive 50, Executive Leadership Council, Sigma Pi Phi (Boule) and Kappa Alpha Psi, Inc.

He was the January 2020 speaker for Belk College’s CEO Speaker Series.

Wilson earned his bachelor’s degree in management from UNC Charlotte and an MBA from the University of Maryland. He is also a graduate of the Tuck Executive Program at the Tuck School of Business at Dartmouth and the BB&T Banking School at Wake Forest University.

A native of Salisbury, Bunker began his commercial real estate career in 1981. His early work in the industry consisted of self-investing in real estate, general brokerage and construction. Since 1991, his company, Bunker Land Group, has actively engaged in the development and investment of commercial real estate and provided site selection services for development and investment partners and clients.

Bunker received a bachelor’s degree in economics from UNC Charlotte and a master’s in real estate development from Columbia University.

Read more about the three new leaders the UNC Board of Governors appointed to the UNC Charlotte Board of Trustees and three current trustees who were reappointed to serve a second term.